Jelly no Puzzle is a brilliant puzzle game by Qrostar, where the goal is to combine all jellies of the same color by moving them left or right. Like-colored jellies will stick together if they meet, and jellies unsupported from below will fall with gravity. Despite the simple rules, the game is full of challenges and surprises. The Android version is the best to get with 70 levels by the designer, and starts with a free demo. The Windows version has the original 40 levels, a subset of the Android version, and is free. There is also a remake of the game in PuzzleScript, which will work on all platforms, with the same levels as the Windows version. 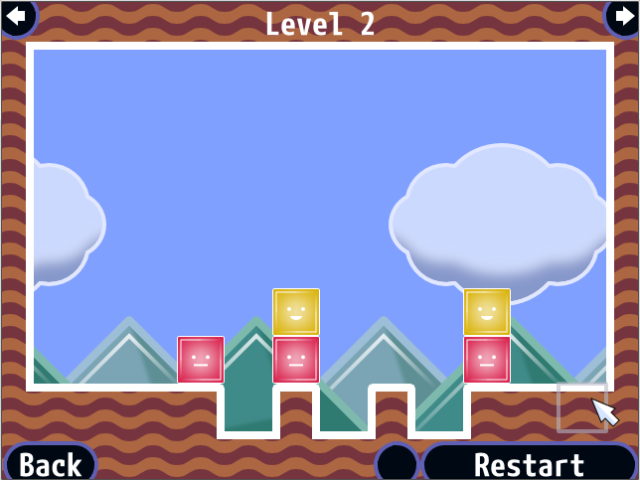 Above is level 2 of the game. It presents the following challenge: If you fill the holes on the ground with red jellies then you can combine the yellow jellies on top of them, but the red jellies will be stuck separated. Likewise if you filled the holes with yellow jellies. So how do you combine both colors?

Qrostar also released 3 bonus levels which were previously hosted on his website and are no longer there, but he gave me permission to share them. Here is a zip of the Windows version including the bonus levels, with a completed save file so you can go straight to them. The bonus levels are 38, 39, and 40, replacing the original levels of those numbers. The last of these is particularly nice.

Recently created are Jack no Puzzle and its sequel Jack no Puzzle . . . . Each contains 10 fan-made levels by Jack Kutilek written in PuzzleScript. They are on average slightly easier than the levels in Jelly no Puzzle. These games are interesting if not quite as inspired as the original.

A sequel to Jelly no Puzzle is going to come out (hopefully) soon, called Yugo Puzzle

A newer game that is reminiscent of Jelly no Puzzle (though the creator actually hadn’t seen it at the time) is Andy Duff’s Push Blox (also available on mobile). In Push Blox you have a pusher rather than being able to control the colored blocks themselves, and there are a few additional mechanisms introduced as the game progresses. The puzzles are generally larger than those in Jelly no Puzzle, with similar overall difficulty. Despite being a bit less elegant than the original, it’s a very good game. An example level from the game, to show how it looks (you’ll need a bit more game knowledge in order to solve it): 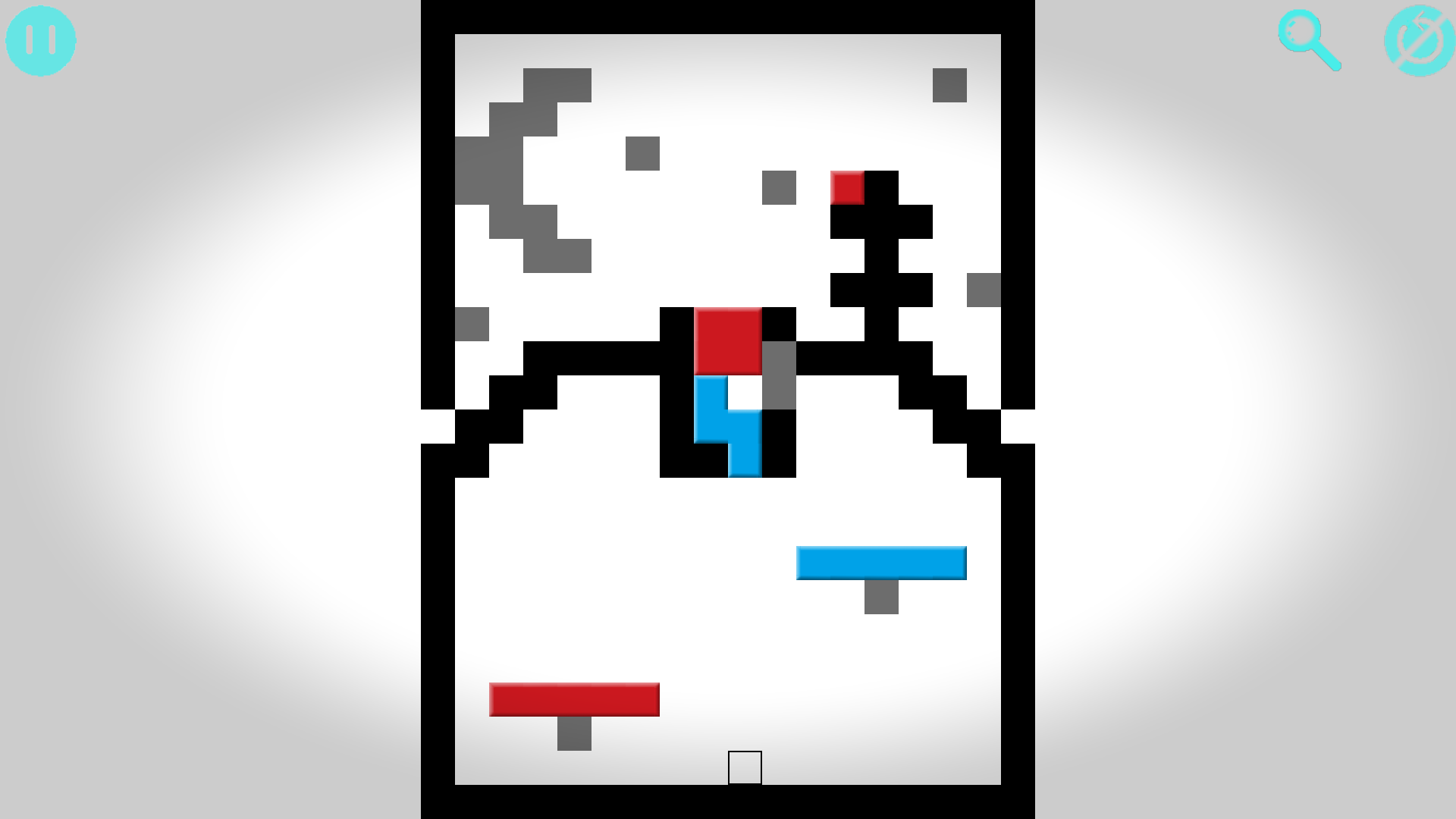 Since first posting this article, Push Blox 2 has been released and I feel it is both a visual and design improvement on Push Blox 1. I would recommend going straight to Push Blox 2, although the original is still very good and is the only version for mobile right now. Here is how the sequel looks: 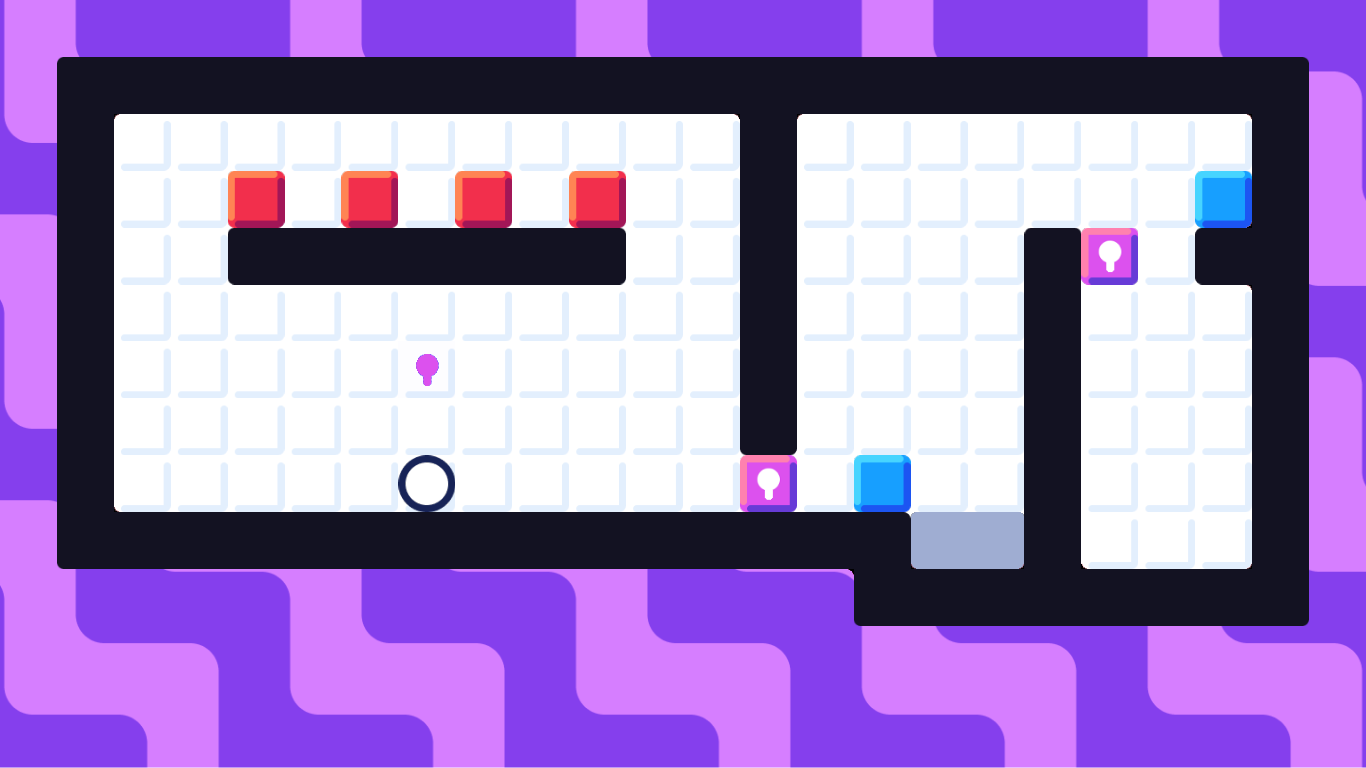